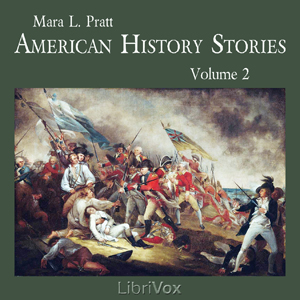 History is brought to life in the second volume of American History Stories by Mara L. Pratt. It is a wonderful introduction for children to American history, this volume beginning with the causes of the American Revolution. Although each chapter is short, it is full of fascinating information, and so well-written that adults will enjoy it as much as children. (Summary by Laura Caldwell)

Reader's Note: This edition contains patriotic songs of the time period. Where these songs have occurred, the lyrics have been read. The music for these songs may be found in the text.

Reviewer: Roger32713 - favoritefavoritefavoritefavoritefavorite - June 15, 2016
Subject: American History Gem
A wonderful review of American Revolutionary highlights. Well worth listening to. Keep in mind that this work is geared toward children and as such, it is decidedly tendentious and perhaps a bit biased toward the American point of view. For example, as an adult amateur historian, how can one listen to the “Massacre of Wyoming” where Americans were murdered, without thinking about the massacre the Americans committed in Pennsylvania of helpless innocent people, which isn’t mentioned? And without detracting from the awesome feats of George Washington, as an adult I know shocking things about Washington that historians choose to leave out of his many biographies. For example, a good case can be made that Washington is responsible for starting the most deadly and savage war American has ever had; the French and Indian war; a major cause of our Revolution. Washing was commander of a reconnaissance platoon when he came upon a French diplomatic mission with a message from the King of France. Washington attacked them and the French diplomat was wounded with many of his party. A savage in Washington’s party wanted to scalp the wounded Frenchman, and he did. The French were not pleased. The rest is history. Washington was very pro slavery, and tried to kidnap his runaway house slave girl, Oney Judge from New Hampshire. Washington even broke laws that he himself wrote in the pursuit of this endeavor.
Yet, this book is a great overview of the most important and famous incidents of our American Revolution.
Laura Caldwell, the narrator, possesses what to me is God given talent as a reader.

Uploaded by librivoxbooks on January 11, 2009